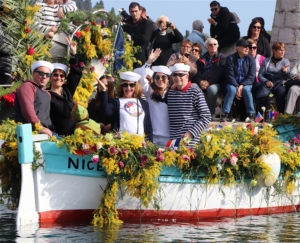 – Participation in the Naval Flower Battle on 24 February: in partnership with the Boatmen Association of Villefranche-sur-Mer;

– Travelling Historical Trail in France: Completed the panels for the permanent exhibition, “Once Upon a time the US Navy and Villefranche-sur-Mer” for the travelling exhibition in the secondary schools of the Provence Côte d’Azur region;

– Permanent exhibition in the USS Salem floating museum in Quincy, Massachusetts, USA: a special USA version of the panels was produced with the assistance of Barry Probst, veteran of the US Sixth Fleet and President of the USS Boston Shipmates Organization;

–  Accredited by the Rector of the Academy of Nice: our request has been approved and granted for a period of five years.

– Audioguide: a bilingual tour of the Old Town of Villefranche-sur-Mer in the footsteps of the sailors of the US Sixth Fleet, available online on the Izitravel application and website;

– Start of editing and subtitling of the filmed interviews (filmed in January 2017) to be part of the web-documentary, the virtual museum and later to feature in the Museum area;

– Improving the Website by adding new digitized documents available to the widest public.

– 4 July U.S. INDEPENDENCE DAY: Organization in partnership with the Municipality of Villefranche-sur-Mer.

– Encounters with the Veterans of the U.S. Sixth Fleet and their families visiting Villefranche.

– Provision of the travelling exhibition and involvement in secondary schools;

– Preparation of a cycle of activities intended for colleges: target group is 9th Grade as part of the history program on the subject of the Cold War; film screening. 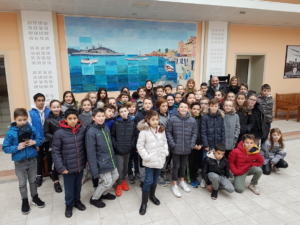 – Creation of the “Museum in School” project in partnership with the DAAC (Academic Delegation for Art Education and Cultural Activity) for the 2020-2021 school year:

– Enrichment of the digitized archive and the online photo gallery: using the services of a professional archivist for digitizing, organising and putting the documents online;

– Publicity for the bilingual French-English audioguide “In the Footsteps of the Sailors of the U.S. Sixth Fleet,” available online, in partnership with the Municipality of Villefranche-sur-Mer, Chamber of Commerce Nice Côte d’Azur, the Tourism Offices and the Regional Tourism Committee;

– Preparation for the creation by 2020 of a museum area dedicated to the history of the American presence on the Côte d’Azur, as part of the Citadel of Villefranche-sur-Mer restoration project; 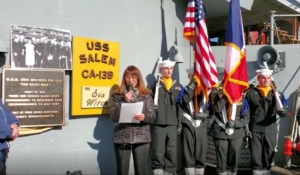 – Creation of a digital archive which can be used in the Museum space and in the Web documentary, the virtual Museum and future publications and works;

– Creation of a permanent exhibition space aboard the USS Salem floating Museum in Quincy, Massachusetts in the United States with the perspective and aim of twinning both museums;

– Creation of a second association based in the state of Massachusetts in the United States, whose aim is to pass on the history of the American presence in Villefranche-sur-Mer through the Naval Museums and Veterans Associations of the U.S. Sixth Fleet.