A moving story from the daughter of Daniel T. Mochen USS Salem sailor

A moving story from the daughter of Daniel T. Mochen USS Salem sailor

My father was Daniel Thomas Mochen, and he was born in Quincy, Massachusetts in 1920.  His parents were from a small Tyrolean village called Dimaro in the part of Italy that was once a part of Austria (before WWI).  His father (my grandfather) had a job at the Fore River Shipyard in Massachusetts, building the USS Salem 139, and my father took a job alongside him; when it came time to commission the ship for duty the Navy asked my father to enlist since he had first-hand knowledge of this vessel.  My father’s service in the US Navy included serving on the USS Massachusetts, USS Hornet, USS Salem and the USS Boston. He earned the WWII Victory Medal, the American Area Medal, the Asiatic-Pacific Medal-10 Stars, the European African Middle Eastern Medal-1 Bronze Star, the Philippine Liberation Medal-2 Stars, and the Good Conduct Medal. My father fought in the Battles of Algiers, the Coral Sea, and Midway. Following his military service he served in Civil Service in Philadelphia, and held positions in Spain, Italy, Puerto Rico, Greece and California.

Along the way he met and befriended fellow sailor Tom Kelley (from Hell’s Kitchen, New York City), and while on the USS Salem-139 as the flag-ship of the 6th fleet, they visited Villefranche-sur-Mer, and made the acquaintance of Germaine Brau, or “Mom Germaine.”  Tom married Claire (Germaine’s daughter), and my father by then was already married to my mother, and they had started their own family.  The two families became great friends, and spent time together whenever possible.

While my father was stationed in Villefranche and on the ship, my mother was residing in a lovely villa on Cap Ferrat with my 4 siblings.  This was just before I was born – when it came time for them to go back to the US, my mother was pregnant with me and so she decided to give me 2 French names (Denise Germaine—the second of course was after Mom Germaine).

During the years 1964 to 1968, my family lived in Naples, Italy and so we had the opportunity to visit France during school vacations and over the summer so my parents would pack up the 6 children (Kathryn, Thomas, Elizabeth, Richard, Denise and Mary) and we would visit our friends in Villefranche (JoJo and Remy and their children and the Kelley children too).

With all the moving we did as “Navy BRATS,” my parents were able to give their children the gift of travel and experiencing different countries and cultures. It was a great way to grow up, and some of my best childhood memories involve the freedom of exploring what I thought of as a perfectly magical town (Villefranche), running through the cobbled streets with Kiki Kelley (Tom and Claire’s daughter – she was closest to me in age) and watching the fishing boats.  We saw the Battle of the Flowers, rode in paddle boats, sat on the edge of the water with our legs dangling over the side while we ate slices of melon, and once my brother even competed in a swimming contest in the harbor. We sneaked out of bed at night and peered through the bars of the balcony to watch the Bicycle Man entertain our parents at dinner.   But one of the best experiences was skipping up to the back door of La Mere Germaine where Fernande the chef would hand us a paper sack of hot, fresh, salty pomme frites – can anything be better?

Fernande, Chef of Mom Germaine in the late 50s

Over the years we have been fortunate enough to retain our relationship with JoJo, Remy, and now Valerie and Thierry, and all the Kelley children.  Philip, Valerie’s son, stayed with me one August here in Boston when he was practicing his English to prepare for his future.  My father died in 2006, at the age of 86.  He loved his French connections and those days in Villefranche were some of the best of his life.  We have cherished our friendships and our memories of Villefranche-sur-Mer, and so that is why we are so happy to anticipate a great visit in 2017.  What a way to start a new year!

I hope you will forgive my lengthy email – there is such a rich history for my family with your part of the world, and I have trouble knowing when to stop!

I have attached some pictures and will gather more in case you want them:

The first picture is Daniel T. Mochen on board the USS Salem-139 in Villefranche Harbor.  I believe it is in the early to mid-50s.

Daniel T. Mochen on board the USS Salem-139 in Villefranche Harbor mid-50s

The next 4 pictures are of the Battle of the Flowers – again I believe it was in the mid-50s. 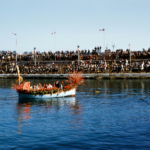 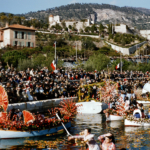 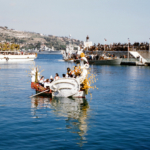 The last picture is my sister Kathryn and my brother Tom with my parents on board the USS Salem-139 while in Villefranche Harbor. The occasion was Kathryn and Tom’s First Holy Communion, which service was held on board the ship (I am told that was a common practice then).

Thank you so much for your attention; I look forward to meeting you!