Home|history, Memories, Navires, Photos, Sailors, Ships|I was the boss of the Diesel gang on the Des Moines 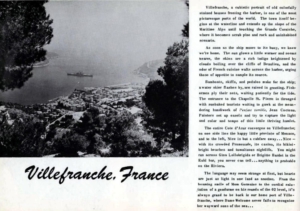 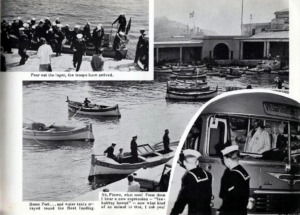 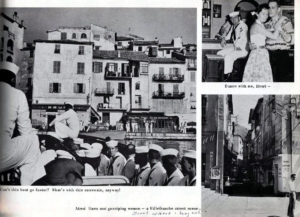 I was on the Des Moines from Feb. 15, 1957 until Aug. 12, 1960. We came over across the Atlantic to Villefranche-sur-Mer in mid 1958 and I was home ported there until Aug. 1960. At the time these photos were taken I was a petty officer 2nd class, E5. I was promoted to E6 just before my enlistment was finished. I had also gone to the Navy dive school and while in the Mediterranean I was instructing the other guys in diving. 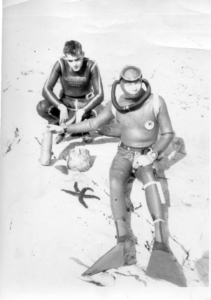 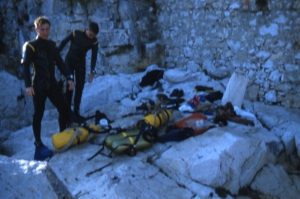 I was their diving instructor

The first photo was taken by one of the group that I was instructing. I took the second photo of the other guys I was teaching. The fellow shown with me in the first photo is named Stevens, and I don’t recall his first name. He was one of my men in the A Division, Diesel gang. His grade at that time was E 3. I was the boss of the Diesel Gang and we were the mechanics who took care of the boats, vehicles, generator engines and portable pumps and anything else that needed fixing. In the second photo you can see a large white bag in the background. It was full of old artifacts that I brought up from out in front of the Citadel. 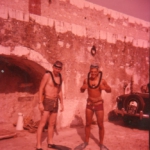 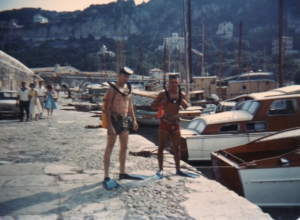 The 3rd and 4th photo shows me and Larry Rowe at the Darse. Sometimes we would carry our scuba gear around to the breakwater and enter the water from the rocks in front of the Darse. How I wish to be as skinny now as I was then. Larry was E 4 and was also one of my men. 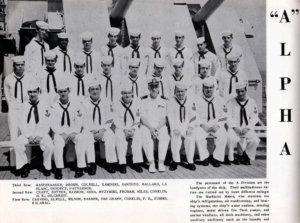 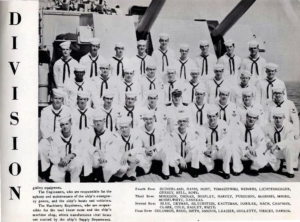 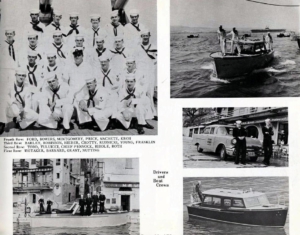 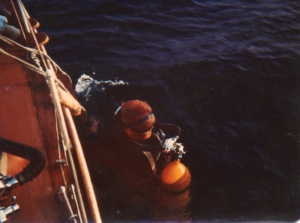 The first picture shows me about to climb back on the sailboat we were diving from out near the lighthouse off Cap Ferrat. I had something in my hand which turned out to be a modern day wine bottle and not interesting. I discarded it in a trash can later. 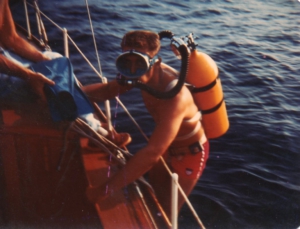 Larry Rowe ready to climb out

The second pic shows Larry Rowe ready to climb out. This was the sailboat belonging to a guy who operated a locker club in Villefranche, which I believe was under that restaurant on the second floor of the customs building. He needed to have some crewmen to help him sail, so he took us out with him sailing. Then he would anchor somewhere and we would dive. I don’t remember for sure but I think that he is the one that eventually gave those artifacts to, since we did not have a place on the ship to put them. 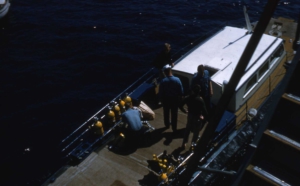 The third pic is looking down from the deck of the Des Moines at the dive boat which would come to the ship to pick up divers. 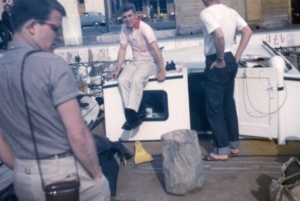 The owner of the dive boat Michel Feix (?)

Picture #4 is on board the dive boat, which was owned by (I am not sure of the spelling of his name) Michel Feix. That is him with his hands in his pockets. He had a dive shop in the Port de Nice, which is shown in pic #5. 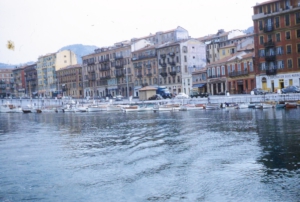 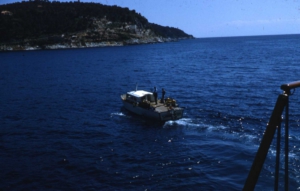 Dive boat pulling away from the ship

#6 is the boat pulling away from the ship. 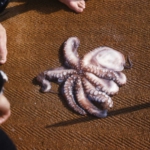 #7 shows some Pulpo I caught. 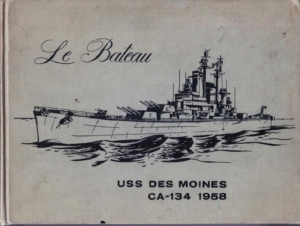 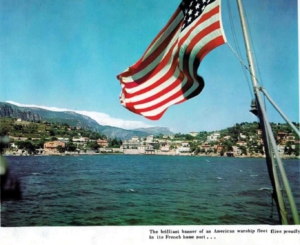 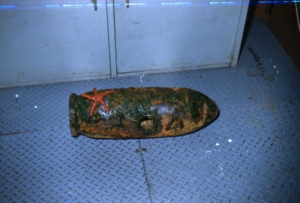 Photo #1 is of a WWII German bomb that we brought up from the waters just outside the harbor at Pyreas (Athens). When I found it, it was very encrusted with marine growth and I thought that I had found an ancient Amphora which would have been worth a fortune. I sneaked it back aboard the ship and scraped the encrustations off and found German words stamped on it. During the night I sneaked it to the back of the ship and dropped back into the water. 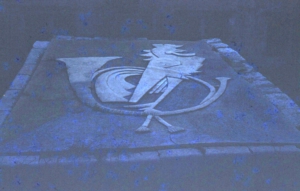 I took this picture in the Citadel of Villefranche

#2 is something that I saw in the Citadel and I have looked for it recently but cant find it. Do you know where it is and it’s history? 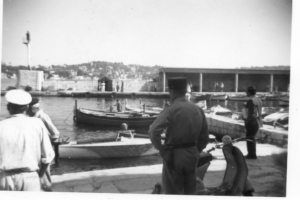 The fleet landing in Villefranche

#3 is the fleet landing with the tent where the radio was kept and the officer in charge standing around. 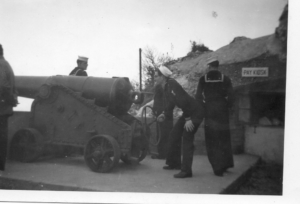 Our first visit to the Palace of Monaco in 1958

#4. This was soon after we arrived in Villefranche-sur-Mer in 1958. It was our first visit to the Palace at Monaco, That is me getting ready to fire the cannon. I can’t identify the other sailors.

The beach of Villefranche-sur-Mer

#5. I am wondering about this pebbly beach. Isn’t it different now?

Click on the link to view more pictures of the USS Des Moines : http://www.ussdesmoines.com/