Down Memory Lane – by Phil Roberts

Down Memory Lane – by Phil Roberts

Warmed by the morning sun, I sit on my deck overlooking a wooded canyon admiring the small deck garden my great granddaughter Iris and I finished yesterday. Splashes of red and white Cyclamens and purple African Daisies, red and pink Geraniums surround a sculptured cement bird bath. A pretty garden with plants set off by the black newly turned soil. What is especially pleasing about this project is that 2-year-old Iris used her artistic eye to place the key plants in their proper places – with no help from her Grandpa.

As I thought about Iris, I knew that I would not likely live to see her as a young adult. This does not bother me particularly, since I have learned that each day is a gift of life to enjoy and treasure. Strangely, I think, I look forward to becoming 85 in two months or so. I fully expect that my next year will offer times of adventure and excitement.

Then I thought, hasn’t this always been true? For example, there are my Navy days in the 1950’s. I crossed the Atlantic Ocean eight times in those two years of active duty. We visited foreign ports all over Europe and in the Mediterranean, Plymouth, and by train, London, Stockholm, Hamburg, Lisbon, Malaga, Cadiz, Gibraltar, Barcelona, Rhodes, Izmir and others. Such an adventure!

Just two years ago, I was invited to attend a US Navy celebration in Villefranche-sur-Mer. A local organization had been formed to honor all the sailors who had been aboard US flagships of the 6th Fleet that called Villefranche “Home Port.” It was the 50th year since the departure of the last 6th Fleet flagship, the USS Springfield. Nearly 100 of us sailors made the trip, and it seemed that the entire 5,000 population of Villefranche turned out to greet and celebrate with us. Old memories continued to flood back. 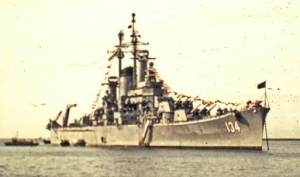 Fast forwarding from 2017 to 2019, my wonderful visit with shipmates in Villefranche encouraged me to share the experiences of my two years aboard the USS Des Moines with my son, Pete, by spending a work party weekend aboard the USS Salem Museum in Quincy, Massachusetts. I had already learned that the Des Moines and her sister ship the USS Newport News had been scrapped, and the last sister ship had become the USS Salem Museum. Because this was an identical ship, I could show Pete where I worked, ate and slept. Our work party assignment was to prepare and repaint the Des Moines anchor that is displayed in the Highway 3A roundabout entrance to Quincy. I loved the thought that here I was taking care of my beautiful ship. We found the anchor unidentified as coming from the Des Moines and I vowed to have plaques made for the anchor as well as for onboard the ship Museum so future visitors will know about my ship, the USS Des Moines.

To my great surprise, this simple desire for plaques mushroomed into a major event, attracting local interest and interest from France – from Villefranche-sur-Mer. Valérie Blouin, who heads the local French organization that hosted the 2017 celebration, is forming a 6th Fleet Museum in Villefranche. She came to Quincy to help with the organization of our plaque event and to seek some alliance with the USS Salem Museum. The plaque event turned out to be very successful with nearly 40 attending the unveiling, touring the Museum and having a lunch together. It earned news and photo coverage from the local Quincy newspaper and the Boston Globe and attendance by Mayor Koch, a local Councilman and a State Senator.

In one of our many remembrances as we worked together, Valérie asked me if I had ever met “Bloody Mary,” the famous woman of the French Resistance? Nobody had ever asked me that before. If I had met her, it would have been more than 60 years ago. Over the next few days, scraps of information fought their way out of my memory banks, filling in many missing details. Although the fog of time has dulled my full recollection, finding “Bloody Mary” is still a magical story.

During WWII as a young boy in the 1940’s, I followed the war in France in the newspapers with their compelling graphics of battle lines and attack arrows, and in the news clips at my frequent Saturday afternoon kid movies. Now, here I was aboard the USS Des Moines in September 1955 as a 20-year-old, looking up at the beautiful French cliff community, Villefranche-sur-Mer. We were here because our ship was to be the first 6th Fleet Flagship to officially call this lovely harbor and community its “Home Port.”

My story begins at a morning’s muster when we stood at attention as the Star-Spangled Banner was played, and then, the incredibly beautiful French national anthem La Marseillaise echoed about the overlooking hills through the harbor. I tried to imagine what the Nazis occupation must have been like in the midst of such beauty. And how dare they!

As our ship had found its way to Villefranche, my shipmates filled my imagination with war stories, and in particular, how Bloody Mary had terrorized the Nazis -and that she still lived in Villefranche. It was with this excitement that my buddy Dick Thorbus and I boarded our liberty boat mid-morning on our first liberty. The pleasant sunny day added to our sense of adventure.

As the liberty boat sidled in against the protective planks, we spilled out onto the pier, dispersing in all directions. Thorbus and I passed by La Mere Germaine which was a restaurant we knew Mom Germaine ran – we had heard all the stories about her attachment to us sailors and we to her. We would visit later, but now we were exploring this special village. Up the narrow street we went, to the “02 Level” our shipmates called it. Past the Texas Bar; we would visit there later too.

We saw a small café on our left with a large front window and entered through the adjacent door. The dim room was quite narrow, with tables and chairs arranged along the left wall as we entered. Perhaps for eight to ten settings. There were no windows other than the one in front. We chose to sit near the back. As it was a bit early for normal lunch hours, there were few customers. In giving the waiter our order, I asked if he knew Bloody Mary. He nodded toward a table several beyond ours and said she is here now. Impossible! Scary! Thrilling! When we had finished eating and paid our bill, we arose and walked boldly up to the table where a woman who looked to be in her mid-fifties sat alone. She didn’t appear to be very tall, but was stocky and it was easy to believe she could be lethal. Her hair was thickly brown with some streaks of grey and cut shoulder length. She looked up as we stopped, with an annoyed expression. “Excuse me, Madame, are you Bloody Mary,” I said. Anger crossed her face and she said, “Not Bloody Mary, Madeline.” she said it with such venom that it shook us. We excused ourselves quickly and left, glancing back to make sure she wasn’t following. Wow, we had met Bloody Mary! But had we?

Who Is Bloody Mary?

The story is that Bloody Mary, after her underground war with the Nazis, settled in Villefranche, lived quietly and sold flowers on the pier to sailors and other visitors. It is generally accepted that Bloody Mary was in reality Edith Duhamel. Some accounts say she sold flowers, and others say she never did this. Edith died in 1966, without validating the stories about her, at least that I know of. Still, there is a street in Villefranche named after her. But Edith Duhamel does not look like the person Thorbus and I met. Further, it is easy to believe that Bloody Mary’s Christian name was Madeline – and no one ever called Edith Duhamel “Bloody Edith.” What seems plausible to me is that there were probably several women who worked for the French underground in and around Nice. And they were just as ruthless as the legend says. I like to think we met Bloody Mary, at least one of them.