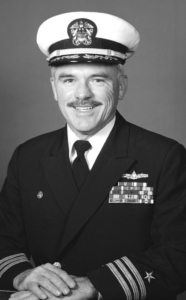 It is with great sadness that we have just learned of the death of Captain Edward Frederick MESSINA, retired from the U.S. Navy, on May 24, 2016 at his home in Florida after a battle with cancer.

Edward F. MESSINA was born on July 3, 1940 in Somerville, Massachusetts and grew up in South Florida. After graduating from North Miami High School in 1958, he joined the U.S. Navy immediately after. He embarked on the cruiser USS Springfield CLG- 7 as a Terrier missile technician. At that time, the USS Springfield was home ported in Villefranche-sur-Mer where he met his future wife Josette Sebastiani, whom he married in 1963. They will have a son named Pascal.

Promoted to Ship’s Ensign in December 1966, he boarded the cruiser USS Boston CAG-1 as a missile repair officer and then as an assistant navigator. In April 1969, he was posted to the position of Chief Shooting Officer on the USS Luce DLG- 7. From May 1970 to May 1971, he was a member of the Naval Staff in Vietnam. In 1973, he obtained a master’s degree in international relations from the University of Arkansas. In September 1974, Captain MESSINA graduated from the School of destroyers and was assigned aboard the USS Belknap CG-26 as an armaments officer and from May 1976 to September 1977 aboard the USS Harry E. Yarnell CG-17. In December 1979, he obtained a 3rd degree from the Superior School of Naval War in Paris, France. From May 1985 to June 1987, Captain MESSINA took command of the destroyer USS Hayler DD-997 which toured South America as the Admiral Ship of the South Atlantic Forces Command. Then he attended the New Navy War School in Newport (Rhode Island) from August 1987 to June 1988; and in June of that year he received a master’s degree in Science from Salve Regina College. From July 1988 to April 1991, Captain MESSINA was Deputy Chief of Staff to the Commander of the Surface Naval Forces of the US Atlantic Fleet.

The USS Ticonderoga CG-47 in the harbor of Villefranche in March 1992 when Capt. MESSINA was her Commanding Officer (photo G.PEREZ).

In July 1991, he had the honor of taking command of the most modern American cruiser: the USS Ticonderoga CG-47 until his retirement in July 1993. He will come with his ship to the harbor of Villefranche-sur-Mer during his stopover from 1 to 5 March 1992. The USS Ticonderoga was officially adopted by the town in July 1990. In addition, Captain MESSINA will return on this occasion to the place of his beginnings in the Navy and especially the ties of heart with his wife from Nice.